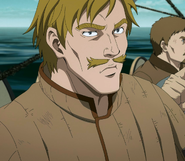 Younger Atli
Add a photo to this gallery

In his initial anime appearance, Atli had short light blonde hair, a mustache, and green eyes. He wore a tan brown outfit with verticle lines, gray pants, and dark brown boots. After the time skip, he later grew his hair out and tied it back. He also wore a bear pelt scarf and a teal colored outfit.

Like other members of Askeladd’s men, despise those who are believers of the Christian faith. Other than that he seemed to be amicable towards those who he worked with, especially his brother.

He was a member of Askeladd's band and one of the only survivors after the battle with Thorkell, when Askeladd's companions turned on each other, along with his brother Torgrim, Askeladd himself, Bjorn and Thorfinn. Later, Askeladd lets him and his brother leave his band under the premise that he will settle down and live a life far off the battlefield and never return.

During the Baltic Sea War, he is shown to have been kidnapped by Vagn's men in order to question him about Thorfinn's whereabouts.

Retrieved from "https://vinlandsaga.fandom.com/wiki/Atli?oldid=9522"
Community content is available under CC-BY-SA unless otherwise noted.